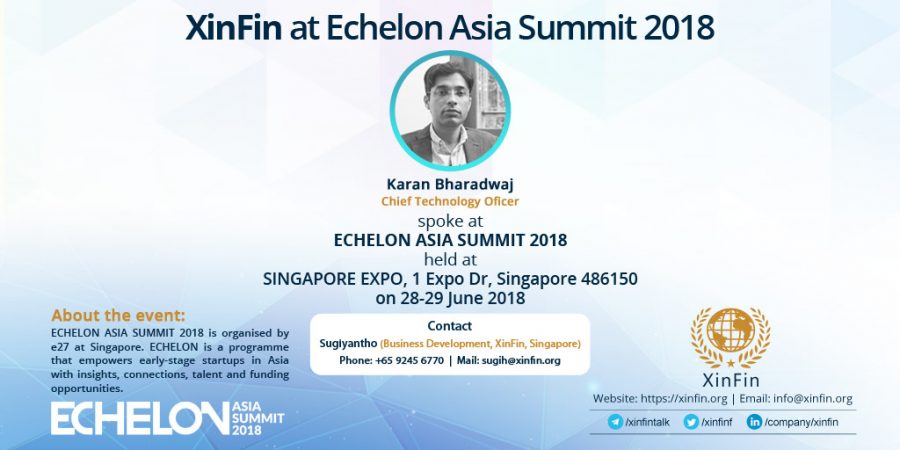 XinFin, the latest sensation in the crypto space, was cordially invited to speak at the elite Echelon Asia Summit 2018 on blockchain revolution.

Singapore, July 14th 2018: The FIRST hybrid blockchain of the world, XinFin, is raising a huge storm not only in the crypto space but in the wider international business ecosystem as well. The revolutionary blockchain platform was recently specially invited to speak at the prestigious Echelon Asia Summit 2018 which was attended by 5,000+ startups, corporate, investors, governments, tech players and customers. Mr. Karan Bhardwaj, the CTO of XinFin represented the company at the speaker panel of the event last month.

Organized by e27, the Echelon Asia Summit is an esteemed program aimed to empower early-stage startups across Asia through expert insights, networking, talent as well as funding opportunities. The 2018 session was held on June 28-29, at Singapore Expo.

Mr. Bharadwaj spoke on the agenda of “Blockchain Revolution” that meandered around the technical limitations of blockchain and tried to find answers on why the blockchain companies require a real use case for the ecosystem to take them seriously. Mr. Bharadwaj was accompanied at the speaker panel by other international blockchain experts including Pavel Bains, Miguel Cuneta and Brian Wee.

“It was a great honor for us to receive the special invitation to speak at the esteemed Echelon Asia Summit 2018. We had a great audience from the Southeast Asian startup world and tech ecosystem and it was an unforgettable experience to speak about blockchain before them. Being the Chief Technology Officer of a revolutionary blockchain platform, we are looking forward to raise awareness about the immense potential of blockchain in enterprise use cases and this event was the perfect platform for us”, stated Mr. Bharadwaj while speaking about XinFin’s participation in the Echelon Asia Summit 2018 last month.

A widely renowned blockchain expert, Mr. Bharadwaj was the founder of a blockchain consultancy called linkDapps- added to being the Chief Technical Officer of XinFin. He has previously worked for various blockchain platforms including Bitcoin, Ethereum, Intel’s Sawtooth, IBM’s Fabri and JP Morgan’s Quorum which has altogether catapulted him into one of the most revered experts in blockchain architecture today.

XinFin has developed a groundbreaking enterprise-ready blockchain platform for global trade and finance which is empowered with an exclusive hybrid structure, made from the combined power of both private and public blockchains. XinFin is aimed to eliminate the limitations of public blockchain through its hybrid structure that promises higher security, scalability and low running cost. The organization is on the mission to reduce the existent gap in global infrastructure via its own secured blockchain transaction portal. XinFin has also launched the FIRST ever blockchain-powered Multisig and multi-currency compatible wallet which will cater to various applications in trade & financing and help with cross-border real time settlement.

For further information about XinFin and its hybrid blockchain platform, please go to https://www.xinfin.org

Asian stocks closed higher on Friday session, extending gains from the previous session, following the overnight rebound on Wall Street as investors shifted focus to the upcoming corporate earnings season amid a lack of escalation in U.S. and China trade tensions