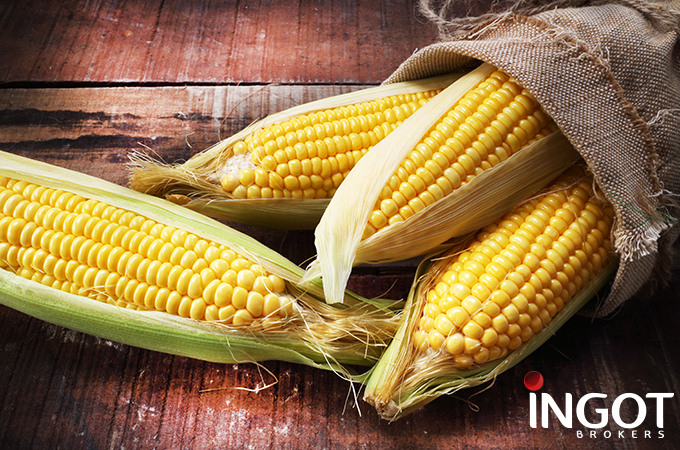 Grains’ futures are lower this morning as the market has quickly digested the bullish June USDA reports to worry about weather and trade concerns.

Despite working together on the North Korean summit, China and the U.S. could be at loggerheads again soon. The Trump administration is due to announce its final tariffs on China Friday, only one of several factors unsettling markets.

Oil prices eased on Thursday, dragged down by rising output and a decline in China’s refining activity, although strong fuel consumption in the United States and a drop in its crude inventories provided some support.

CBOT July Wheat futures experienced a major loss, which took a big bite out of Tuesday’s gains, erasing most of them. Volatility continues to be the norm, with prices taking several large swings in either direction since late April. CBOT July Futures prices fell 18 cents to 5.16/4 USD per bushel.

Ahead of Thursday morning’s USDA export report, trade analysts expect the agency to report between 5.5 million bushels and 16.4 million bushels in wheat export sales for the week ending June 7.

Ukraine grain exports for the 2017/18 year is down 9.8 percent this time last year, as the country failed to repeat the record-breaking harvests from 2016. To-date exports include 611 million bushels of wheat and 673 million bushels of corn for the current marketing year.

China sold another 8.7 million bushels of its state reserves of wheat at auction Wednesday, which was about 11.6 percent of the total available for sale.

CBOT July Corn Futures slumped slightly because of the weakness from other grains, although losses were mostly minimized as July futures dipped 4 cents to 3.76/2 USD per bushel.

Ahead of Thursday morning’s USDA export report, trade analysts expect the agency to report between 31.5 million bushels and 51.2 million bushels in corn export sales for the week ending June 7.

Additionally, French consultancy FranceAgriMer says the country’s 2017/18 corn stocks are up slightly to 110 million bushels – up 3.7 percent from a month ago.

Preliminary volume estimates were for 371,055 contracts, dropping significantly below Tuesday’s final count of 601,343.

CBOT July Soybean Futures were spooked by the prospect of retaliatory Chinese tariffs if the U.S. imposes its tariffs on that country late next week, as some are speculating will happen. Skittish prices are dropping 3 percent, down by 35 cents to trade at 9.71/4 USD per bushel.

Private exporters reported to USDA the sale of 6.5 million bushels of soybeans for delivery to unknown destinations, with 97 percent of the total earmarked for the 2018/19 marketing year, which begins September 1, with the remainder for 2017/18.

Ahead of Thursday morning’s USDA export report, trade analysts expect the agency to report between 7.3 million bushels and 29.4 million bushels in soybean export sales for the week ending June 7.

The U.S. Dollar weakened from its three-week highs after the Federal Reserve took a slightly more hawkish policy tone