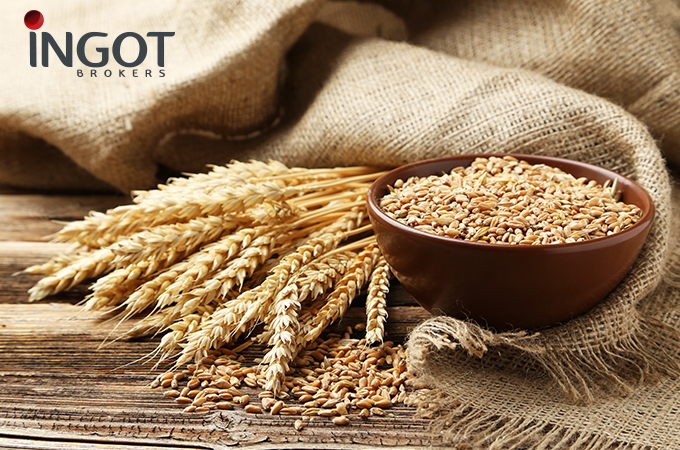 Grains’ futures were higher on Tuesday’s session after United States Department of Agriculture’s June report shared some generally bullish numbers. Corn and Wheat maintained their leads, while Soybean prices faded throughout the session to end with moderate gains.

The central U.S. weather is mixed, but will offer plenty of near-normal temperatures over the next several days causing some pressure on grains’ prices.

Oil prices fell today, pressured by rising supplies in the United States and expectations that voluntary output cuts led by producer cartel OPEC could be loosened.

CBOT July Wheat futures saw some of the most significant grain commodity gains on Tuesday supported by weather concerns in some major production areas. Wheat July contracts closed Tuesday’s session at 5.33-1/2 USD per bushel and currently trading at 5.31-1/4 USD a bushel at 6:50 GMT.

According to the United States Department of Agriculture’s estimates, Russian Wheat production dropped by more than 128 million bushels compared to May’s estimates for 2.517 billion bushels due to drought concerns.

In Ukraine, the country lowered its 2018/2019 Wheat forecasts by 3 percent, pressuring the total production to 937 million bushels caused by drought concerns.

Furthermore, USDA could cut its forecast of old crop carryout this morning by 25 to 50 million bushels due to strong exports but may make little changes to its new crop estimate.

Additionally, USDA’s crop ratings out on Monday continue to show strong yield potential but conditions slipped nearly a half-bushel per acre based on our model of state-by-state ratings. Ratings still translate into record yields if they hold into the fall.  Based on average ratings for this week, yield potential is 181 bpa nationwide, in a range between 166 to 195. Ratings account for about 50% of the variance in yields historically this week.

CBOT July Soybean Futures are a little stronger today after holding August lows yesterday on oversold conditions to trade at 9.52/4 USD per bushel at 6:50 GMT.

USDA’s progress report showed soybean yield potential dipping a little but remaining strong. Export inspections yesterday of 23.6 million bushels remain less than the rate needed to reach USDA’s forecast for the 2017 crop, with China continuing to account for around a quarter of the shipments. That is one reason why USDA is likely to lower its forecast for exports in this morning’s report, boosting old and new crop carryout by 25 to 30 million bushels.