Grammy nominated super producer team ‘Cool and Dre’, and developer Peter Parente have introduced their latest project, GreedSwap ($GREED) – one that has a lot of eyes ready and wondering: what’s going on and what’s next? It was only a matter of time before music and the vastly growing cryptocurrency market came together to change the way music is bought and sold to the world.

Chess Over Checkers: The Deal And The Plan

According to a recent press release, GreedSwap, also known as the $GREED project, announced a new contract on one of the fastest and third largest growing cryptos, Cardano (ADA). This new blockchain will hopefully add value to the growing list of strong projects taken on by the Cardano team. With 2,300 smart contracts getting ready to launch, ADA looks to have a huge year looking forward.

For those who have been watching this blockchain and the broader market for some time, you likely understand how important each new partnership and project can be. 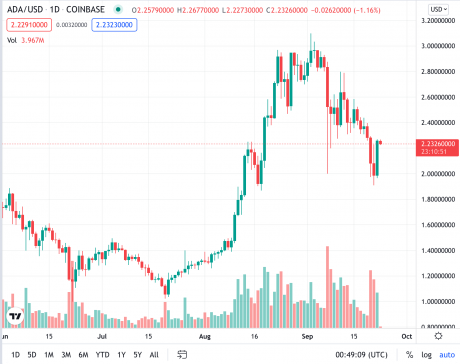 What makes GreedSwap a potentially important player for Cardano is its versatility, depth and broader ceiling as a company in general. $GREED not only provides a game changing factor for the music industry, but it also provides something for investors, with a deep ecosystem. That ecosystem will include farms, staking pools, a multichain NFT Marketplace, and a major Metaverse build in Decentraland that will include NFT wearables, driveables and NFT keys. These keys will give you VIP access to certain areas in GreedSwap’s virtual world that will also include a Greed Music studio where you can watch your favorite musicians and recording artists create music, while also being able to watch them stream live concerts.

Related Reading | Cardano Trends Down, ADA In Danger Of Sliding Back To $2?

Only Time Will Tell: The Change We Seek, Or Doom We Meet…

This news will hopefully provide a new look at how music can now be shared to the world, allow the ability to connect artists with fans at a new level, and also engage consumers via crypto. Artist and musicians have already taken a likes to the NFT world by collaborating and doing exclusive tracks and albums. Big names in hip-hop especially, such as Curren$y, have gotten involved (Curren$y released an exclusive NFT project titled ‘Financial District’, and he won’t be the last to do this as many artist have taken this approach quite seriously).

Other artists, like DJ Premiere have gotten involved with NFTs and crypto as well. The ability to cross promote on a number of different levels beyond music makes it easier for GreedSwap to get its name around to the crypto world.

Hopefully it sticks, and we all can see what this company can do to impact a new generation of music.

KONSTRUERA: Ethereum Just Turned But $3, a hundred and fifty Presents A Major Problem

four Years of KuCoin: From the 7-Person Team in order to 8 Million Customers Worldwide