US tariffs weighed on the Canadian dollar, while the Euro shows resilience amid easing political tensions in Italy 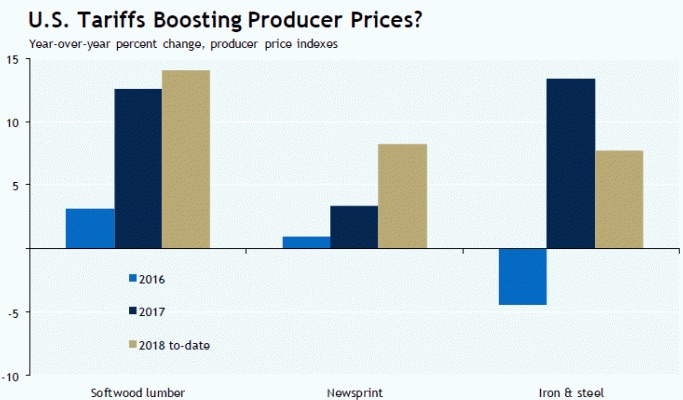 The US dollar recorded its second consecutive losing session on Thursday, weighed down by Washington’s decision to lift exemptions from tariffs on imported steel. On the other hand, the euro is closing into its first weekly gain in seven weeks on Friday after worries over Italy’s political crisis ease.

The Dollar index, which measures the strength of the U.S Dollar against a basket of six other major currencies, fell by 0.11 percent to end the session at 93.98.

In Europe, the single currency continued to show resilience against the dollar, despite Washington’s trade announcement, the euro sustained levels set earlier in the day on the news that Italy’s anti-establishment political leaders Matteo Salvini and Luigi Di Maio reached a deal to revive their proposed coalition government. Thus deterring the prospect of a new snap election and which had put global markets on edge.

On the economic space, Euro Zone inflation surprised economists and analysts on Thursday, after Consumer price data (CPI) released on Thursday showed inflation jumped to 1.9 percent, well above the forecast of 1.6 percent.

The Spike in Europe’s inflation figures could revive expectations of an eventual rate hike by the European Central Bank if market concerns about politics in Southern Europe diminish further.

The euro out-muscled the dollar on Thursday, jumping by 0.25 percent to trade at 1.16913, after having risen 1.1 percent on Wednesday, marking its second-biggest daily gain this year.

Meanwhile, in the United Kingdom, The Sterling edged up by 0.08 percent against the Greenback on Thursday, to trade 1.32954 at the close.

Regarding the safe-haven assets, reignited fears of a global trade war supported Yen, The greenback edged lower by 0.09 percent versus the Japanese Yen, to close at 108.81, gravitating back towards Tuesday’s five-week low of 108.10.

Meanwhile, Gold lost ground level versus the greenback on Thursday; the XAUUSD lost 0.23 percent to end the session at 1298.30 dollars per ounce.

Looking at commodity-based currencies, against the Canadian dollar, the greenback Jumped by as much as 0.65 percent to trade at 1.2956 at the close, retracing most of the gains made by the loonie Wednesday on the back of a hawkish Bank of Canada statement.

Regarding the U.S Crude Oil prices shed 1.7 percent to settle at 67.10 dollars per barrel at the close.

Over in Australia and New Zealand, the Aussie and Kiwi Dollars finished the day on mixed territories versus the greenback, with the Aussie trade at neutral levels, while the Kiwi dollar advanced against its American counterpart; The AUDUSD edged down by 0.05 percent to close at 0.75672, and the NZDUSD added 0.19 percent to end the session at 0.6999.

Asian markets were slightly mixed on Friday after the U.S. declared tariffs on steel and aluminum imports would be applied.