Home » Press Releases » Over $5 Billion In Bitcoin And Ethereum Moved From Cold Wallets Amid China Crackdown.

Over $5 Billion In Bitcoin And Ethereum Moved From Cold Wallets Amid China Crackdown.

China continued its crackdown on crypto, leading to massive amounts of bitcoin and Ethereum being moved from exchanges. Immense pressure from Chinese central banks following the latest iteration of the China crypto ban has seen exchanges suspending operations in the region. In light of this, large amounts of crypto are being moved from exchange wallets to presumably safer wallets.

The transactions are thought to be going to cold wallet storage. Crypto crackdowns in the country caused a surge in USDT sell-offs against the Yuan as users tried to get rid of their crypto holdings before the ban takes full effect. The latest release by the Peoples Bank of China targets over-the-counter activities like those carried out on Huobi and OKEx exchanges and declared that changing fiat to crypto or crypto-to-crypto was now regarded as an illegal activity in the country.

$3.1 Billion in Bitcoin and $2.4 Billion In Ethereum Moved

After Huobi announced it was going to retire Mainland China’s active user accounts, the exchange had begun to move funds. The exchange had moved a total of $3.1 billion worth of BTC on Sunday. The activity was flagged by btcparser which had flagged the initial transfer of 72,999 bitcoins being moved from Huobi’s wallets. Subsequent transfers were then made in 2,000 BTC increments. 1,800 bitcoins then went to a single address and the rest got split into small wallets. This strikes as odd but could possibly be the exchange moving the funds in the way they deem the safest. 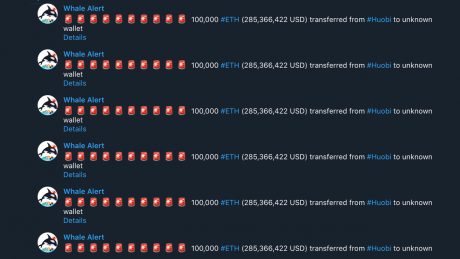 The Ethereum transfers took a different route. Wallets that had been flagged as belonging to the Huobi Exchange then began to move Ethereum into unknown wallets. By the time the transfers were done, 800K ETH had been transferred. A total of eight Ethereum transactions were made, each carrying 100K in ETH worth over $285 million on each transaction. Adding up to a total of $2.4 billion in ETH moved to unknown wallets.

Exchanges, following the release of the latest ban, responded by explaining that they would begin retiring user accounts. The process was meant to happen gradually in order to ensure that users’ funds remained safe. Mainland China user accounts are scheduled to be retired on December 31, 2021, the last day of the year. This gives investors roughly three months to put their crypto affairs in order. But despite this long time frame, the rush to get rid of crypto holdings saw price quotes for USDT drop to as low as 6.12 Yuan per USDT.

This is not the first time that China has banned crypto actives in the country. And every time one of these bans was announced, it has had a negative effect on the market and the latest ban has been no different. The announcement saw a crash in prices across the crypto market. Although the market has since recovered. While the effects of the crash linger on.