Another week of wild volatility has hit the cryptoasset market, as China’s latest ban collides with accelerating adoption to catalyze big market swings.

First, fears of the financial collapse of Chinese developer Evergrande sent crypto sliding last Monday, before the market turned around as Twitter added Bitcoin tipping. El Salvador’s President Bukele then bought the dip, only for the gains to be erased on Friday as Chinese authorities announced yet another crypto crackdown. 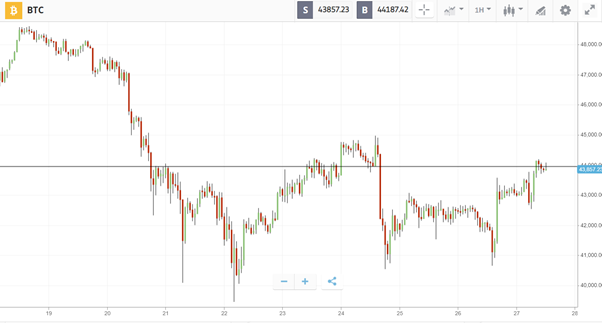 When the dust settled, Bitcoin and Ethereum were both sitting slightly higher with 2% and 5% weekly gains respectively. DeFi tokens however, enjoyed even bigger wins in anticipation of more Chinese users being forced into the DeFi wilderness. Exchange protocol Uniswap has risen 23%, while up-and-coming platforms Tezos and Cardano are celebrating 25% and 8% gains.

Digital asset traders were left with déjà vu on Friday as Chinese authorities announced yet another crypto crackdown.

The Chinese central bank said in an announcement that all crypto-related activities are now illegal, including exchange services between cryptoassets, and between fiat currencies and cryptoassets.

Bitcoin tumbled on the news, but soon recovered on a wave of optimism about the opportunity for adoption elsewhere. Weighing in on Twitter, U.S. Senator Pat Toomey said that “China’s authoritarian crackdown on crypto” represents “a big opportunity for the U.S.” to take part in what is “arguably the most exciting innovation in finance in decades.”

Twitter has taken crypto another step closer to full-blown mainstream adoption by enabling Bitcoin tipping, and revealed plans to roll out an NFT authentication feature.

Tipping, which is currently only available on iOS, uses Bitcoin Lightning Network to allow anyone to receive direct donations from profile visitors. NFT authentication on the other hand, is expected to allow users to connect their wallets to showcase their NFT collections.

Alongside Reddit’s Moon Tokens on Ethereum, and Facebook’s ongoing Diem project, crypto now looks set to be a permanent feature of social media. This could lead more otherwise uninterested social media denizens to develop cravings for cryptoassets over the next few years.

The DeFi revolution has begun, and the dizzying pace of innovation is making it difficult for even the most informed investors to keep up.

eToro is now offering an easy way to stay ahead of the growing decentralized finance movement. The DeFiPortfolio bundles together the top decentralized finance projects, giving you exposure to every corner of the ecosystem — from Uniswap to Yearn.Finance and more — without having to spend hours on research.

As September draws to a close, analysts including Galaxy Digital’s Mike Novogratz are anticipating a bullish fourth quarter.

In October, the biggest upcoming price catalyst could be the approval of a Bitcoin ETF. Bloomberg analyst Eric Balchunas gives this a 75% chance.

On the bearish side, Washington now has crypto firmly in its regulatory crosshairs. Jake Chervinsky, crypto lawyer at Compound, expects enforcement activity from the U.S. Securities and Exchange Commission (SEC) and Commodity Futures Trading Commission (CFTC) in the next two weeks as the agencies seek to boost performance before the end of the fiscal year.