Undoubtedly, climate change has brought numerous problems to the world. The activities of man, which mainly centers on industrialization, have created a grave issue that will only take the combined efforts of everyone to solve. Although we can’t dispute the countless benefits of industrialization, the climate is the one paying the repercussions of human affairs.

The past year has seen world leaders clamor about addressing climate change and set up targets to save the world from the frequent forest fires, coastal flooding, extinction of animals, rising sea levels, carbon emissions, and so many more. However, more collaborative efforts are desperately needed to effect the kind of change that is required.

Technology and industrialization are often accused of worsening the climate. While this is true, technology can still play a huge part in making the change the whole world clamor. Rather than pointing fingers, technology should be deployed as a way to correct the climate. This is where blockchain comes in.

Green Beli may be relatively new to the scene, but it still addresses the problem the world has been facing for decades. Founded in 2019, Green Beli’s mission is to promote an eco-friendly lifestyle and reduce plastic wastes by engaging in campaign awareness through the media. Green Beli has contributed immensely to the environment, and now, it has come out with a new project known as the Green Beli NFT Game.The project also envisions combining the Green Map, the genesis project with the game, therefore building a green metaverse. The have fascinating plans for a greater contribution to the NFTs & Gaming ecosystem.

The latest project is Green Beli’s way of raising funds to promote its eco-friendly activities. Green Beli commits at least 30% of revenue from the sales of tree seeds, land & NFT items, or 10% of the total Green Beli Ecosystem Fund, allocated to community and environmental initiatives. The game is based on the concept of saving the world one tree at a time and utilizes the blockchain platform to achieve its goal. The characters are in the form of Green Hero NFTs – Fire, Earth,Wood, Water and Metal. These trees are upgradable and come in different rarities

The funding round witnessed participation from BSCStation, Basics Capital and some of the biggest names in the blockchain venture capital. Onebit, FIM Ventures, AU21, X21, and Momentum 6 were some of the prominent names involved. Green Beli raised $1.1M funding, highlighting the ecosystem growth around environment and sustainability. Green Beli was also selected as one of the top 6 gaming projects in Game2Blockchain event accelerated by Axie Infinity, Tomo Chain, Kyber Network and other partners.

An NFT marketplace is available in the game that allows trading between various players. Players can purchase NFT items and lands where they can grow trees. Growing a collection of trees qualifies you for PvP, and you can farm to earn more rewards. Plus, you can boost the stats of your trees with Fusion. 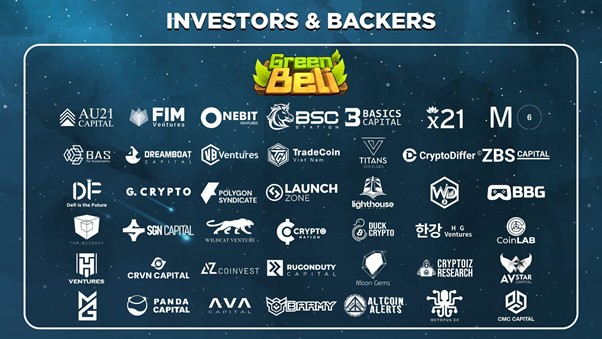 Green Beli NFT Game uses GRBE tokens as a medium of exchange. After the successful IDO on BSC Station, the token is currently listed on leading BSC DEX, Pancakeswap. It is the game’s native token that allows the purchase of items in-game. These tokens can also be offered as a reward. The game’s growth will positively impact the token’s price and as you amass more trees, you could earn profitably. In addition, GRBE tokens will be given out, and new ones will be created to maintain the game’s growth and its price. Green Beli’s current plan of action also involves preparing an open Tree for Seed Sale with 20.000 Seeds by the September end.

Kenyan Fintech Player: ‘Banking the Unbanked’ Is the Most Important Use Case for Digital Currencies in Africa