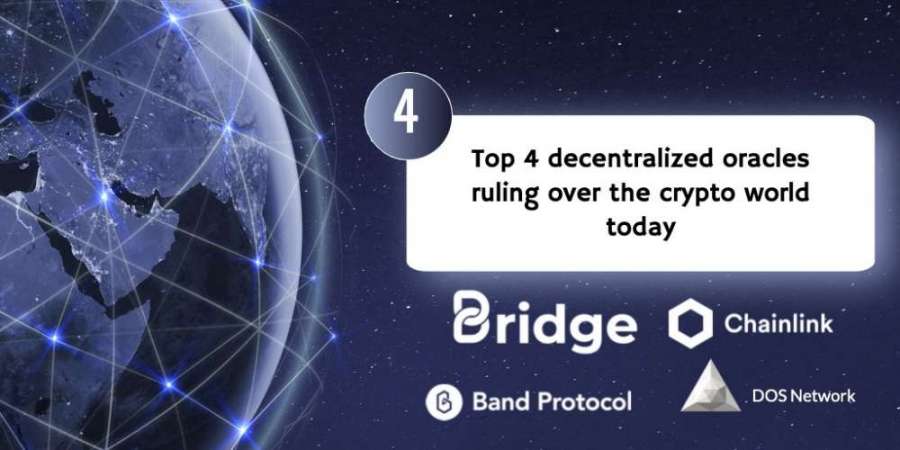 Decentralized oracles are fast becoming the order of the day with DeFi strongly commanding its hold over the crypto world. A major advantage that decentralized oracles assure over centralized counterparts is increased data credibility. Centralized oracle systems are governed by one single authority and it’s that particular entity which provides data to smart contracts. There is no other point to source the data in case one wishes to verify the accuracy of the information provided by that particular governing entity. But, a decentralized oracle system depends on several external sources to fetch data and each independent source provides information without any coordination with each other. This way, it becomes easier to verify the authenticity of data provided and only the most reliable information is sent to smart contracts.

Here goes a brief on top and most promising decentralized oracle systems.

A pioneering name in the decentralized oracle world, Chainlink has to be on top of the list. Chainlink promises reliable and secure oracles that are resistant to tamper or manipulation. The system’s individual nodes serve as smart contracts and perform decentralized computations independently to verify credibility of data being injected into smart contracts. Besides, the Chainlink middleware too works to assure data privacy between smart contracts and blockchains. It’s to note here, Google has recently announced to integrate its high-tech BigQuery cloud warehouse with Chainlink middleware. The oracle system holds partnerships with over 200 leading companies and its data oracles have been integrated with almost all the Ethereum-based Decentralized Finance projects. Link is the native token of Chainlink. The current market cap of Chainlink is 5.86 billion USD.

Backed by esteemed organizations like Binance and Sequoia Capital, Band Protocol is another major name in the world of decentralized oracles. Being a cross-chain system, it is compatible with several blockchains and assures provision of highly credible tamper-resistant feeds for smart contracts. Band Protocol sports a very flexible oracle system design which enables developers to utilize almost all kinds of data, ranging from real-world events, random numbers, weather, sports and so on. It helps in the secured development of DeFi applications as well as other use cases beyond DeFi apps. The native token of Band Protocol is BAND. The current market cap of BAND is 286.66 million USD.

One of the latest in the market, Bridge Oracle is the first decentralized public oracle on TRON blockchain network. Being a public oracle it allows easy participation of small businesses which is expected to boost the growth of TRON network. One of the benefits of Bridge is that it allows addition of diverse data sources and enables addition of different types of proof to ensure data accuracy. It offers three API contracts, Public API contract, Decentralized API contract and Enterprise API contract. The native token of Bridge is BRG but users can also pay with TRX (TRON Token) to avail Bridge services. The current market cap of Bridge is 91 million USD.

This is another cross-chain decentralized oracle system which is compatible with several blockchain. The DOS oracle is especially renowned for its ultra-fast speed which helps the network to complete the off-chain date process in just nanoseconds. The native token of DOS Network is DOS. The DOS Network has shown great promise since its ICO last year in March and has generated huge returns (around 23.01x of the original price) for token holders. The current market cap of DOS is 36.53 million USD.

HeDge Trade (HEDGE) on the Best Market Makers for Crypto