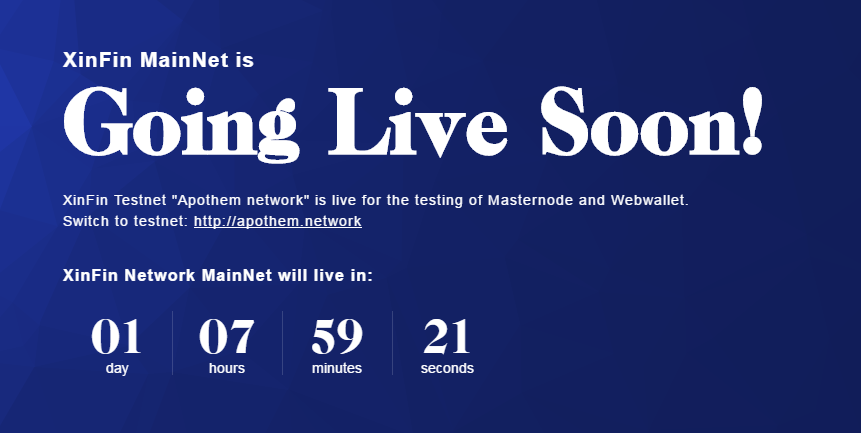 May 28th, three days to XinFin’s mainnet launch, a big change was announced to the tokenomics. This change is to take effect with XinFin mainnet launch which is scheduled for June 1st. According to the press release, changes and updates cut across Token Allocation, Decentralized wallet with Private Keys, and Tokens Swap.

With a 62.5% reduction in the total supply. This amounts to a reduction in some allocations such as Founders and core team allocation, Ecosystem Development, masternode incentive, hedge pool, and social cause.

“I would … say that the team has been as transparent as pretty much any team can be and the fact that the founders regularly engage with the community and feel responsible to the community is unique in this space. I trust what they do because they have been working hard to build something with amazing promise and have always been straight with us.”

This He said while answering a raised question about the token allocation reduction.

There is not a doubt that the team members are working behind the scenes to make sure the mainnet launch is a big success.

The XDC wallets previously used have a centralized keystore with email ids and passwords to access them. With the mainnet launch, users will have decentralized wallets with Private keys as other popular blockchains. The community members are to understand that the safety of their private key is up to them. Previously, the system supports password restore to access wallets since it was run with a centralized keystore. Now, there will be no restoration for a lost private key since there will be no backup on any centralized system.

There has been a web and mobile wallet (Android Version) released for use by the community. These wallets will hold the new mainnet XDC tokens. As previously released, the new wallets will also make use of the new wallet addresses with the ‘xdc’ prefix as opposed to the previously used ‘0x’ prefix.

The wallet can be used to hold the Ethereum based XDCE tokens and other ERC tokens as it comes with the option to add new token details from the Ethereum Mainnet, Xinfin test, and Main net. The wallet is still in its initial stages but as time passes updates will be released by the team to allow its full use.

! These findings (italicized) has not yet been made official by the team.

The team has also released A Step-by-Step Guide to Swap Tokens on XinFin Mainnet. This can be used by all community members to walk them through the swap processes on Alphaex and the creation of new decentralized wallets with private keys.

Many members seem to come up with the major questions as listed below after going through the swap updates. The answers following are as provided by the admins.

Question: I have deposited my XDC on Alphaex, should I withdraw them to the new wallet now? OR I tried withdrawing the XDC tokens from Alphaex, I got an ‘invalid Address’ error when I entered my new mainnet XDC wallet address, what should I do?

Answer: Please hold your tokens on Alphaex, the team will announce when the Swap is done.

Question: What will happen to my XDCE, will it become invalid? Should I Swap it too?

We are not getting rid of XDCe. XDCe will be present for the next few months until all the XDCe tokens are converted to mainnet XDC. Please note that this conversion will take a few months.

The Currency Analytics and FinancialReport24 are a proud supporter of the XinFin Hybrid Blockchain. Get in touch to stay updated about the project.

Understand what Blockchain Sharding is with this simple illustration. Blockchain in Simple Language