Understand what Blockchain Sharding is with this simple illustration. Blockchain in Simple Language 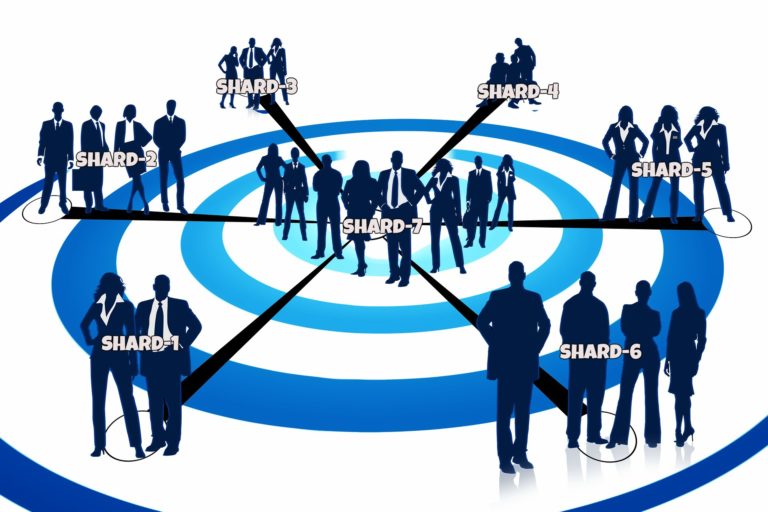 Sharding provides a way to divide the whole network nodes into groups or shards which can independently confirm transactions. Each shard operates like a full blockchain only that they don’t store all the transactions on the blockchain.

Illustration: How the blockchain work

Someone used a scenario to explain how the blockchain confirms transactions and it is interesting- take a look:

Imagine a large hall, with a single stage with an audience. Every person in the audience has a camera to capture the moment. When a person comes on stage, everyone takes a photo. This must be done in the space of ten minutes (the block times for bitcoin). In this case, it will take an unscrupulous fellow ten minutes to convince all who took the photo that what they took was wrong and replace it. And in the case of a blockchain, the photographers are scattered all over the world.

From the illustration above, the photographers are nodes scattered all over the earth. The person on stage is the transaction. The time interval represents block times.

The blockchain model has a major challenge- scalability or transaction speed. This is especially known with bitcoin and Ethereum. If all nodes have to record all transactions simultaneously, then the process will be slow. This is why Ethereum’s Co-founder proposed a solution especially for Blockchain running a Proof of Stake -PoS consensus model, it is called Sharding. Sharding provides a way to divide the whole network nodes into groups or shards which can independently confirm transactions. Each shard operates like a full blockchain only that they don’t store all the transactions on the blockchain. With Sharding, a blockchain can scale faster as the transactions on the chains become 100% faster with each shard.

Effectively, each node in the network will not need to store all the blockchain but can share all records with other nodes. Some people opined that shards will sacrifice security for scalability. This is true because shards will have fewer nodes which makes it easy for a takeover and cause double spending for the transactions confirmed in a particular shard. But, Vitalik also proposed that nodes under a shard could be randomized after every transaction. This is such that a node does not confirm two transactions under a shard consecutively. Therefore, it will be hard for a bad player to determine all nodes that are involved in confirming a transaction under a particular shard at any point in time.

If we will use the illustration above to explain sharding:

From the illustration above, each stage or platform represents a shard. Do you get it?