XinFin’s Mainnet Launch is upon us: What to Expect 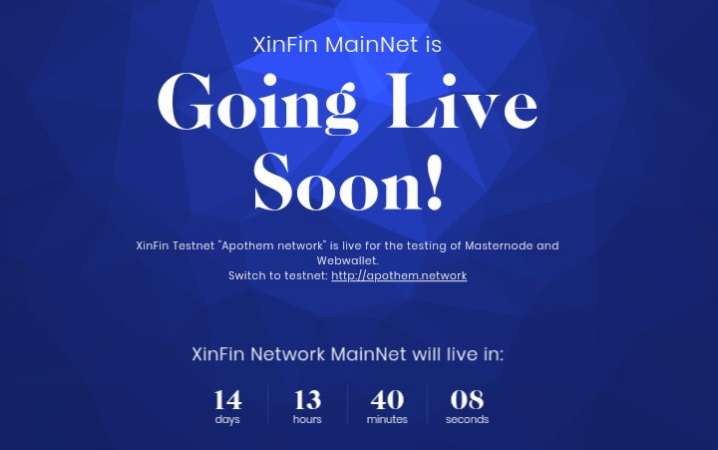 Xinfin Hybrid blockchain is closing in on its mainnet launch. The launch is scheduled to be on 1st of June according to the countdown timer on Xinfin.network. The project team has been working over the years to make sure for a successful launch. There have been a series of presentations on the testnet for various organizations to help them see what the project can do to help them in all aspects of its functionality. The community is excited and ready as the join the team in preparing for the mainnet launch.

Earlier, there has been a bug bounty released by the team for interested and inquisitive community members to run a master node on the testnet (apothem.network). The community has since then been working hard to help fish out bugs in the master node application for different operating systems. You can also join in by reading updates and how-tos here.

Xinfin is a hybrid blockchain that merges the private and public blockchain features to help organizations and the trade and finance sector. With the hybrid blockchain model, users, organizations, governments, large corporations can run master nodes as networks. Transactions in these networks are private and open only to the network members or users while they appear as normal transactions in the public chain. The blockchain can also be used as normal public chains such as bitcoin and Ethereum. It uses the XDPoS consensus protocol to confirm transactions and produce new tokens.

Over the past months, Xinfin has been keen on revealing the use cases of its blockchain model to attract the world’s trade and finance sector. Some of the uses cases can be found here.

So what should the world expect with the mainnet launch in a few days time.

XDC01 wallet addresses will no longer carry ‘0x’ prefix but ‘XDC’. You can check the testnet on Apothem.network to check how it looks like.

TradeFinex has been designed to link financiers, sellers, and buyers in a transparent way to ease the challenges in the trade and finance world. Built on the XDC01 protocol, the platform enforces KYC on each user. Each user has to lock an amount of XDC token to be able to use the platform. With the mainnet launch, the platform will be fully operational.

TradeFinex has also been presented as a very viable option to help large corporations and governments to create tokenized bonds which are tradeable on secondary markets like AiX. Through the partnership between XinFin and AiX, tokenized bonds can be presented to organizations which need them to finance their venture. The world can expect the onboarding of large corps to create their own tokenized bonds after the mainnet launch.

There will be much impact and demand of XDC tokens after the mainnet launch. All users on TradeFinex, MyContract.co, Master node owners, governments or large corporations which wish to use XinFin’s solution for different purposes such as creating bonds needs to lock a large amount of XDC tokens. This kind of volume cannot be gotten or supplied by Alphaex alone. Alphaex remains the only exchange which can trade XDC tokens. XDC tokens are based on the XDC01 protocol while XDCE tokens are ERC20 tokens which are tradeable on multiple exchanges. Apparently, there will be a need to also list XDC on multiple exchanges where XDCE is listed.

There are more to the Mainnet launch

The team members at XinFin are working to make known more exciting use cases of the protocol in the present age. There are more to expect with the mainnet launch. Be sure to get in touch to know more.

Are you keen on getting real updates and information while fighting against fake crypto news? Are you interested to see the crypto space filled with news or information filled with a clear cut distinction between opinions and facts? Join The Currency Analytics in its venture, mission, and Vision. We are the answer.